16. The Harvard Chapel: ‘The Baptism of Christ’ (1905) by John La Farge is a rare example of this American artist’s work.

John Harvard (1607-1638), son of a prosperous butcher in the Borough High Street, was baptised in this church (then St Mary Overie) in 1607 and attended the local grammar school. After graduating from Emmanuel College, Cambridge, he emigrated to Massachusetts in 1637 to establish a college of education there. He died of consumption a year later, leaving his library and half his fortune to the College of New Town, later renamed Harvard University.

Joseph Choate, US ambassador to Britain (1899-1905) and former Harvard alumnus, encouraged the University to commemorate Harvard’s link with Southwark by refurbishing this Chapel. Choate commissioned the American artist John La Farge (1835-1910) to create the three-light window which dominates this space.

The main subject is the Baptism of Christ, alluding to the original dedication of the chapel to St John the Baptist and also to the baptism of John Harvard himself. Above the transom on the left are the arms of Harvard University, and on the right are those of Emmanuel College, Cambridge. In the centre are the Royal Arms as they appeared between 1415 and 1603. However, the supporters and crest are of a later period, probably dating from the window’s restoration in 1948.

The striking difference between this window and others in the cathedral can be attributed to the original research and development in glass making undertaken by John La Farge himself.

‘The Baptism of Christ’ is the only example of this brilliant American artist’s work in England. La Farge is widely regarded as the creative inventor of opalescent glass for church windows.

Note: The irregularities and mixtures of colour in the angels’ wings and the robes of Christ and St John. This sculptural approach to glass is typical of La Farge windows,  combining layers of contoured glass in swirling colours, requiring minimal glass painting to achieve its effect.

Presented by J.H. Choate, U.S. Ambassador in 1907 to commemorate the Baptism at St Mary Overie of John Harvard,1607-1638, founder of Harvard University. The donor described the window as emblematic of ‘the deep-seated and abiding relations of friendship which unite England with the United States’.

Damaged in World War II, the window was restored in 1948 through the generosity of Harvard alumni in the USA. Harvard alumni also contributed to the full conservation of the window by Holy Well Glass of Wells, Somerset, in 2004. 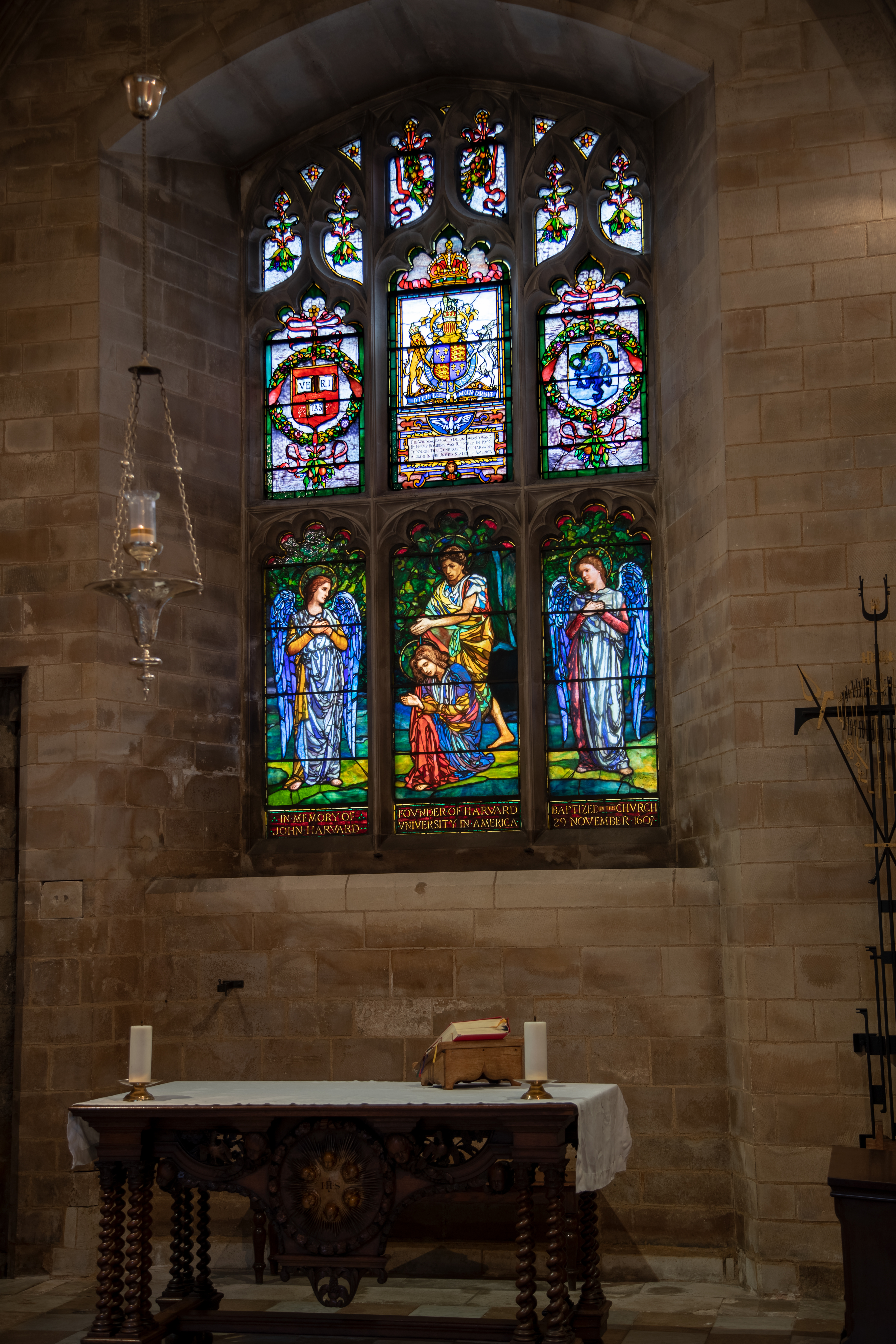 17. St Peter healing Tabitha at Joppa. Three medallions linked with foliage. The top scene bears the inscription ‘Be thou faithful unto death and I will give thee a crown of life’; below St Peter is shown healing Tabitha at Joppa (Acts 6, v.40), and below again is the inscription ‘O that I had wings like a dove’ (Psalm 55) with a small boy and his kite.

Note:  The small boy and his kite in this narrow Victorian window attended by two angels.

Given by Samuel Benson, Chaplain of St Saviour’s, 1867.

Given in memory of John Ellis, d. 1856, a generous friend of the poor, by his friends and admirers of his benevolence.

19. Christ healing the Sick. Single light in which Christ, beardless, is shown healing the sick. Comper is said always to have shown Christ beardless. (See also no. 48, Christ in Majesty).

Maker: Ninian Comper, 1929. His mark – strawberry fruit, flower and leaf – is in the bottom right corner.

Note:  In this late work by Comper, the use of red and blue coloured glass, gold stain and fine linear draughtsmanship inspired by 14th Century stained glass style.

A tribute raised by subscriptions of 670 parishioners of the working classes, in memory of George Wood, a surgeon who lived in the parish.