In Memoriam Doorkins Magnificat of Southwark Cathedral (? – 2020) - A poem by Michelle Lovric

What is taken out of this world when an old cat dies?

We must go back to what happens when the kitten arrives:

a squall of blood and fur, and a small blind thing comes unseeing into the light.

The fortunate own homes and biographies known from birth to death.

But Doorkins was not one of those.

A cat with a long pedigree of love is an undulating smile,

a question-mark with expectations, twilight’s happy rushing idiot, a dandy and an aesthete,

the Madonna of the cardboard boxes, landlord of the bed and lap.

We cannot know how she fell from grace or if

Doorkins was simply never one of those.

We don’t know what left her homeless in South London, a skitter of street cat,

her hunger eased by no one but herself; some nights only the dark between her ribs.

Hedge-sleeper, a bat’s soft ear for danger, soon a cat of middle years with stiffness in the leg

and a quick claw to show that human hands had not always been kind.

Cats with biographies trust us. Doorkins was not one of those.

She trusted the cathedral’s open door, came inside by day, accepted food,

yet never forgot the rituals of the hunt, the call of the moon nor the tang of her own wet fur.

Some Italian artists painted cats in their Annunciations and Sacred Families: all-knowing tabbies,

sober eyes engaging with the viewer, ambassadors between God and man, creature and human,

showing how diaphanous are the veils between.

Doorkins was one of those,

rendering people tender by her smallness in the grandeur of the nave,

reminding them how little they know of infinity and how much about love.

She acquired a name (itself a song of praise to God), a book, a Twitter account, merchandise, fame.

She stole the show at the Nativity, drowsing in the straw. Another cat might have had her head turned,

grown smug, believed her pawprints the imprimatur of stars.

Doorkins was under no delusion.

She was, as she preferred, out a-tigering in God’s jungle, the Cathedral garden

the night in June when terror came among the humans of her parish.

While helicopters churned above and sirens howled below, house-cats with biographies

comforted those locked in, soothed frightened homes with a ferocity of purrs,

were awarded extra treats and hugged against the dark outside.

Doorkins was not one of those.

Hardship had schooled her to crouch and hide, shallowing her breath, splaying her senses.

Take nothing for granted, she’d learned, not even life. She lay low until the startled morning

when she found her cathedral door locked and taped. Un-arked, in the churchyard,

a congregation of one, for days she was alone, the verger and the vigil.

At last all souls were once more let inside. Some wished to never leave.

Doorkins was one of those.

Not domesticated but churched, she exchanged her cathedrals of twigs for this one of stone.

Frailer, she became more human, eased herself onto gilt cushions, slept through Evensong,

soaked her bones in the comfort of heating grates, baptised the Dean with her tongue.

There was less slink to her, more limp, less substance, just a handful of heartbeat and shadow.

– one more beloved being, once given to the light,

who shone, flickered, stilled, and went into the night. 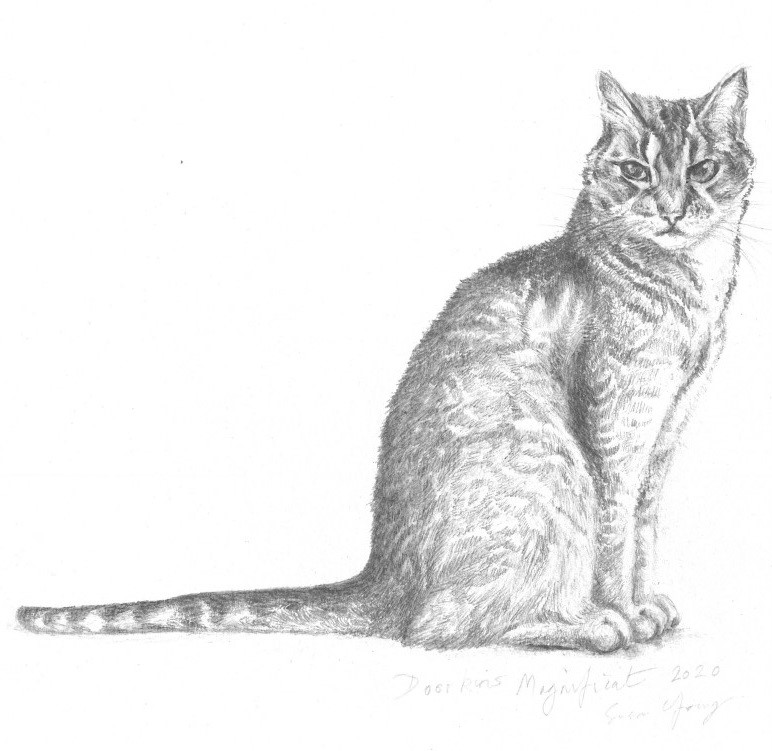