Richard’s work appears across the UK and at various sites globally.

The Dean of Southwark, the Very Revd Andrew Nunn, said,

“Ask a child to draw a house and they will probably draw something that is similar to the house that all of us have drawn.  Our images of a house are iconic.  But whilst we will draw such a house few of us live as comfortably, with a smoking chimney, a picket fence, outside space and roses round the door.  ‘The Small House’ invites us to think about our concept and fantasy of house and home and to ask the serious questions about why so many live in sub-standard housing or on the street.  Richard Woods’ ‘The Small House’ sits in the big house, the house of God, iconic in its own right – the abiding with us God, who opens the door of the divine house and invites us in to find a home.”

Opening times are 9am – 5pm daily and The Small House is on display from Saturday 6 August through to Wednesday 31 August. Admission is free.

Richard Woods was born in Chester, England, in 1966 and graduated from the Slade School of Fine Art, London in 1990, where he trained as a sculptor. Woods is well known for his architectural installations and re-surfacing of structures that propose an absurd twist on the cult of home improvement and DIY aesthetics. His works are characterised by cartoon-like decorative surfaces, bold patterns and vibrant colours.

Woods most recently executed a 86,000 sq ft drawing of a house on the main lawn in a solo exhibition at Houghton Hall and completed a major architectural commission in South Korea for the Winter Olympic Games in Pyeongchang, designed an interior for the Comme des Garçons' flagship store in Osaka, orchestrated the mock Tudor overhaul of a private residence in New York and transformed the interior of Cary Grant's former Hollywood residence for its new owner, Jeffrey Deitch. In 2003, his re-paving of a cloistered courtyard was the centrepiece of The Henry Moore Foundation's exhibition at the 50th International Venice Biennale of Art. 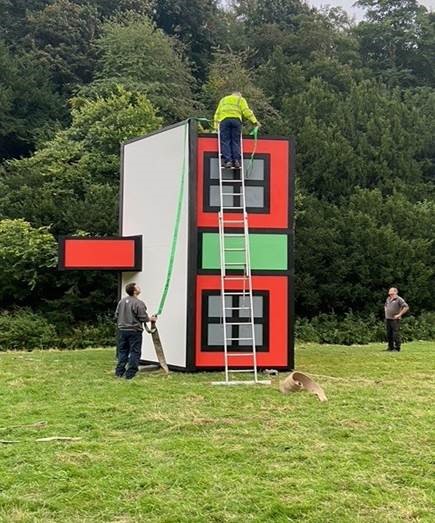